ST. KITTS AND NEVIS’ PM AND NATIONAL SECURITY MINISTER, DR. THE HON. TIMOTHY HARRIS, IS IN ST. VINCENT AND THE GRENADINES FOR REGIONAL SECURITY MEETING

Your Nominations Are Needed for Tourism Awards

5 April 2019 (United Nation) – The Venezuela refugee crisis, which has already left some 1.1 million children, returnees and people in-transit lacking protection and basic services across Latin America and the Caribbean (LAC), has prompt the UN Children’s Fund (UNICEF) to call on regional Governments to uphold their rights and protect unaccompanied, undocumented children.

“UNICEF is encouraged by Governments’ efforts to jointly seek regional solutions to the challenges posed by largescale migration that are in line with international standards and national laws, such as the protocol adopted by Ecuador to protect uprooted children,” said María Cristina Perceval, UNICEF’s Regional LAC Director. 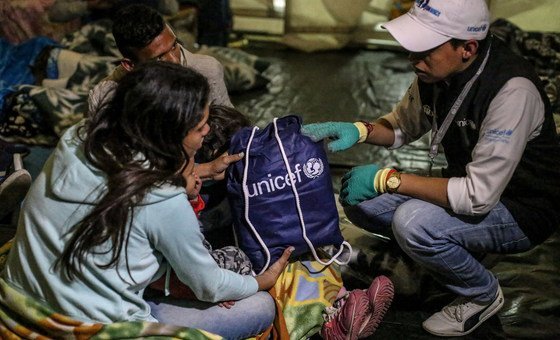 At night, migrant children and mothers gather at a UNICEF temporary rest tent in Rumichaca, Ecuadorian side of the border with Colombia (31 October 2018)., by UNICEF/Moreno Gonzalez

However, she added, as the crisis inside Venezuela continues, migrants increase, and essential protection, healthcare and education services in host and transit countries, are suffering additional strain.

Since 2015, amid spiraling hyperinflation, shortages of basic goods, political turmoil, violence and persecution, more than 2.7 million Venezuelans have left the country to seek safety or a better life abroad, according to the Office of the UN High Commissioner for Refugees (UNHCR).

While more than 250,000 Venezuelans filed asylum claims last year, mostly in Latin America, many remain in an irregular situation, lacking guarantees to basic rights and exposed to exploitation and abuse.

Meanwhile, uprooted children and families face challenges in regularizing their immigration status, which can impact an array of services, as well as early childhood development.

“Human rights standards call for States to allow children entry and registration as a precondition for carrying out initial protection assessment procedures,” stressed Ms. Perceval. “Even when they are unaccompanied and without official documentation, they should be immediately directed to specialized personnel, who can assess their protection needs”.

In addition to providing States with valuable planning and budget information, UNICEF called registering children on the move “the first step in guaranteeing their rights”.  The agency has appealed for $69.5 million to meet the needs of migrants across the LAC region.

Despite Venezuela’s official land-border closures with neighbouring Colombia and Brazil in February, thousands of people continue to flee daily, many risking their lives by wading across torrential rivers or facing exploitation and abuse by armed groups controlling treacherous pathways, according to UNHCR.

Earlier in the week, security forces in both Venezuela and Colombia struggled to control some 46,000 desperate people who forced their way across the Simon Bolivar International Bridge border crossing.

Moving in both directions, crowd-barriers were overturned as peopled risked being crushed or trampled by the crowd. Fortunately, no casualties were reported.

UNHCR spokesperson, Andrej Mahecic, toldreporters in Geneva that “the crowds were a result of the Tachira River swelling, which in turn is making crossings by foot even more dangerous than usual”.

Since 23 February, when the Venezuelan restrictions on border crossings were instituted, people have resorted to using muddy footpaths known as “trochas” and wading across the Tachira River to get to Cucuta where they work, study, and get medical attention, food and medicines unavailable at home. Thousands of others enter en-route to other Latin American countries.

The Tachira is prone to flash floods and its strong current often carries logs and dead animals, while bandits and armed groups often prey on the refugees and migrants that use the trochas, according to UNHCR.

“With heavy rain having swollen the river and flooded many of the footpaths, the only viable option for most Venezuelans was the bridge”, he explained, adding that the situation illustrates the dangers of irregular cross-border movements by desperate people.

Although river’s current had temporarily subsided by mid-week, the onset of the rainy season means “crossings will continue to be highly dangerous”.

Error type: "Forbidden". Error message: "The request cannot be completed because you have exceeded your quota." Domain: "youtube.quota". Reason: "quotaExceeded".

Did you added your own Google API key? Look at the help.

Check in YouTube if the id TheSKNIS belongs to a username. Check the FAQ of the plugin or send error messages to support.