Hurricane Dorian slammed into the Bahamas Sunday, the strongest on record to hit the northwestern part of the archipelago, leaving residents seeking shelter as they faced rising waters, torrential rains and wind gusts up to 220 miles per hour.

The storm strengthened to a Category 5 on Sunday before it made landfall. Forecasters at the National Hurricane Center called it “catastrophic” and warned that its “extreme winds and storm surge will continue for several hours.”

This is a region that prides itself on withstanding powerful storms, and the Bahamas has revamped its building code and stepped up enforcement to prepare for disasters such as this one. But the combination of Dorian’s slow pace, furious wind speeds and heavy rainfall with the low-lying islands’ vulnerability to flooding could be lethal.

Prime Minister Hubert Minnis, who had warned that 73,000 residents and 21,000 homes could be affected, urged residents of the Grand Bahama Island on Sunday to move to safer ground in the main city of Freeport. On the Abaco Islands, parts of the main city of Marsh Harbour flooded.

“As a physician, I have been trained to withstand many things — but never anything like this,” Dr. Minnis said during a news conference. “This is a deadly storm and a monster storm.”

As it approached the Bahamas, the storm grew larger, with winds extending up to 45 miles from the center. Its core was expected to move slowly — at seven m.p.h. — over the Abaco Islands and toward the Grand Bahama Island on Sunday, bringing with it a storm surge that would raise water levels as much as 18 to 23 feetabove normal and deliver more than two feet of rainfall in some areas. 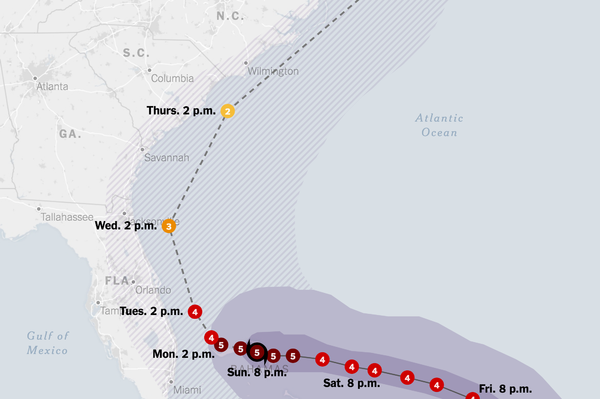 Maps tracking the hurricane’s path as it makes its way toward Florida, Georgia and the Carolinas.

In some parts of Abaco, the prime minister said, “you cannot tell the difference as to the beginning of the street versus where the ocean begins.”

Reaching sustained wind speeds of 185 m.p.h., Hurricane Dorian is tied for second place among hurricanes in the Atlantic basin with the highest wind speeds, according to Dennis Feltgen, a spokesman for the National Hurricane Center in Miami. Records go back to 1951.

Residents hunkered down in schools, churches and other emergency shelters, but there was concern that some would try to brave the storm in their homes.

Dr. Minnis had ominous words for those who had not sought shelter.

“I hope this is not the last time they will hear my voice,” he said. “And may God be with them.”

In Abaco Island, where surging waters were gushing through the streets, he warned, “They are now in for the long haul.”

Shelters in Abaco are full, said Louby Georges, the director of international affairs for Human Rights Bahamas. Many of Marsh Harbour’s poorer residents had sought refuge in churches, but those churches were not on the list of government shelters to receive food and water, so Mr. Georges was worried that they would run out of supplies.

“My guy at St. Francis Church said there is no drinking water,” Mr. Georges said in a telephone interview from Nassau, the Bahamian capital. “There are no trained emergency personnel with them.”

Residents in Abaco Island were growing desperate as the storm bore down on them, he said.

“People are sending voice notes, people are crying,” he said. “You can hear people hollering in the background.”

Frankie Fleuridor, an activist who works with the Haitian community in Marsh Harbour, was worried that not everybody would be able to leave.

“It’s tough for people in the shantytowns,” he said, because their plywood houses are not built to withstand hurricane-force winds and are vulnerable to flooding.

He said that he had rented hotel rooms for the most vulnerable, but could not afford to do more.

Darren Henfield, the foreign minister and a member of Parliament from Abaco, said that residents of one of the vulnerable neighborhoods in Marsh Harbour, called the Mudd, took advantage of a lull as the storm passed over to leave their damaged homes and seek safety in the main government building.

“We’re now set to ride out the rest of the storm,” he said in a broadcast carried by the Broadcasting Corporation of the Bahamas.

On Grand Bahama Island, residents watched with worry as friends sent videos of the destruction that Dorian inflicted as it crept over the Abaco Islands. Still unsure of exactly what route the storm would take once it reached Grand Bahama overnight, residents were preparing for the worst.

BASSETERRE, St. Kitts, October 23, 2020 (Press Unit in the Office of the Prime Minister) - During a time when citizens...

SUN ISLAND CLOTHES CEMENTS ITS RELATIONSHIP WITH THE EXPLORERS CLUBS

Basseterre, St. Kitts, October 23, 2020 (RSCNPF): The Sun Island Clothes Limited has once again shown its support for the Explorers...